Pandian is a 1992 Indian Tamil-language action film, directed by Tamil director S. P. Muthuraman. It stars Rajinikanth, Kushboo, Janagaraj and Jayasudha. It was released on 25 October 1992 as one among Deepavali releases, along with Thevar Magan. The film\'s music was composed by Ilaiyaraaja and his son Karthik Raja. This film was a remake of the Kannada film Bombay Dada, starring Tiger Prabhakar and also directed by him. Tiger Prabhakar portrayed the antagonist in the remake. It was dubbed in Telugu as Secret Police and Hindi as Kanoon Ka Khiladi.

The film is about Pandian (Rajinikanth), who wants to avenge his sister\'s (Jaysudha) husband\'s (Charan Raj) death. He joins the murderer\'s gang and how he takes revenge forms the crux. Then the gang came to know that Pandiyan did an undercover operation, Pandiyan was a police officer. The rest of the story deals with how Pandiyan caught the culprit, with stylish approach.

Also Stay Tuned with us on :- 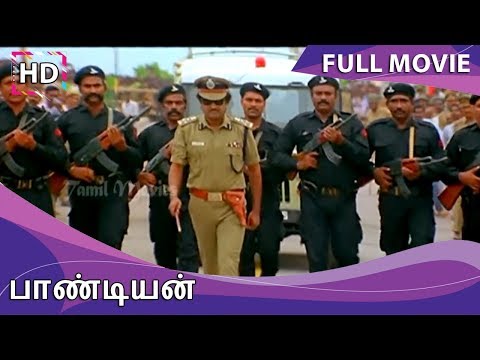